The club participated as W8MHV in class 1A, meaning one transmitter, club or non-club group, power output of 100 watts or less. A total of 475 QSOs and 1,470 bonus points resulted in a score of 3,124 points. A breakdown of QSOs per band can be found below. The ACARA earned bonus points for the following:

Athens County 9-1-1 Emergency Communications Center again provided the lovely 50' crank-up, trailer-mounted tower which would be used to support the two HF antennas. Eric McFadden, WD8RIF, met Josh Clegg of the Athens County 9-1-1 Center on the Friday prior to Field Day weekend to take delivery of and to help deploy the county's 50' crank-up mobile tower. Unfortunately, just as had happened in 2021, the winch cable snapped as the tower was being extended. However, unlike last year, when the cable snapped with the tower at full-extension, this year the cable snapped when the tower was still fully collapsed, leaving the ACARA only a 25' tower to work with. 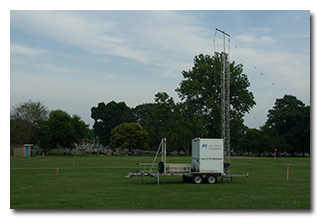 The HF station consisted of the Elecraft K3 from the ACARA's Jim Crouse Memorial Radio Station which is located at the Red Cross of Southeastern Ohio. An Elecraft KX3 and a solar-charged battery provided by Eric McFadden, WD8RIF, was used to make the first six HF QSOs to earn the Natural Power Bonus. A dual-yardarm atop the (now) 25' trailer-mounted tower supported an 80m/40m fan dipole and a 10m/15m/20m/40m trap-dipole as inverted-vees. The 80m legs of the fan-dipole were oriented north-to-south to provide east-west directivity and the 40m legs were oriented east-to-west to provide north-south directivity. The trap-dipole legs were oriented north-to-south orientation to provide east-west directivity.

The VHF station was originally to consist of an ICOM IC-7410, a homebrew two-element 6m yagi, and a homebrew 20' mast, all of which were provided by John McCutcheon, N8XWO, and was to be used primarily for SSB QSOs. However, at the last minute, Paul Schulz, WD8SCV, offered his ICOM IC-7300 and computer to the VHF station in order to run the digital mode, FT8. John's yagi was aimed using a traditional Armstrong rotor. The VHF operators finished the weekend having completed 25 QSOs, all using FT8. Very little 6m SSB activity was heard this year and no 6m SSB contacts were completed.

The VHF station also included an ICOM IC-2100 2m FM mobile transceiver provided by Eric McFadden, WD8RIF, and a Cushcraft Ringo and mast provided by N8XWO; these were used to pass formal Radiogram-traffic to Ted Jacobson, W8KVK, via 2m FM simplex to earn the Formal Message to ARRL SM/SEC Bonus and the Formal Messages Handled Bonus.

Jeramy Duncan, KC8QDQ, once again provided his Jeep-portable satellite rover station. Jeramy's station consisted of a Kenwood TS-2000 HF/VHF/UHF transceiver, a computer-controlled azimuth/elevation rotor, and VHF and UHF yagis mounted on a common boom. Jeramy earned the 100-point Satellite Bonus for the ACARA by completing a QSO through the 47-year-old AMSAT OSCAR 7 satellite and later made four QSOs through the (much newer) XW-2C satellite. 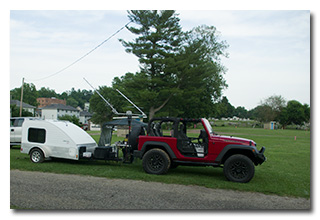 Logging for the HF and the VHFs stations was by non-networked laptop PCs, running N1MM Logger+ software, provided by Eric McFadden, WD8RIF. The laptops, Evolve Maestro Ebooks, were purchased this year by Eric specifically for logging, and were originally intended for use by schoolchildren. The Evolve Maestro Ebooks, configured with Microsoft Windows 10 Pro Education, were available at MicroCenter for a paltry sum of $60 each. The HF station logging PC interfaced with the K3 and KX3 and tracked band and mode changes. The VHF logging PC wasn't interfaced with either the IC-7410 or the IC-7300, so loggers had to manually enter band- and mode-changes. Both stations took advantage of N1MM Logger+'s ability to record the operator's identity for post-event analysis. The Satellite QSOs were logged to paper and later entered into the VHF station's log. Following the close of Field Day operations, the HF and VHF/Satellite logs were combined into one file for analysis and submission to the ARRL.

Athens Mayor Steve Patterson was able to accept the invitation made by Jeff Slattery, N8SUZ, to visit the ACARA Field Day operation. During his visit, he presented a proclamation from the City of Athens. (View the proclamation: Amateur Radio Operators Appreciation Days, June 25-26, 2022.) 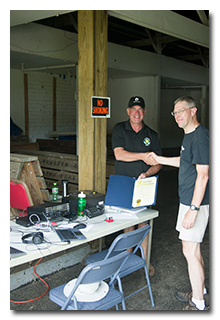 The goal for this year's Field Day was, like that of previous years, to have fun and to get new or inactive hams on the air and this year that goal was met. As-yet-unlicensed twelve-year-old Bob Weber made the nine SSB QSOs on 20m. Bob's father, Joe Weber, KE8LRZ, logged for Bob and also made six 20m SSB QSOs of his own. 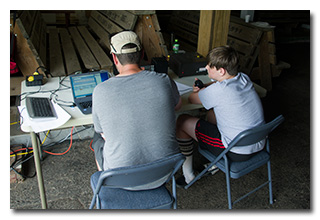 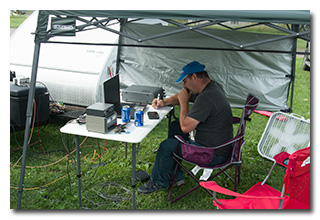 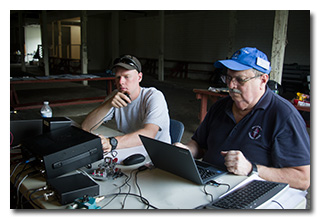 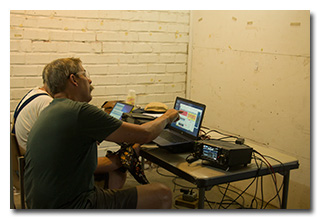 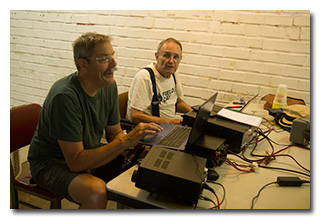 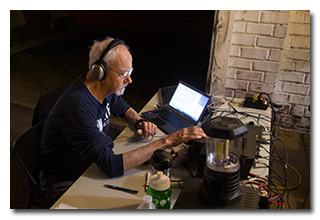 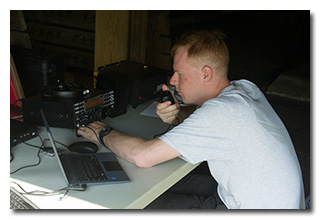 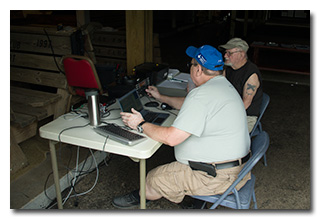 The 100-point Educational Activity Bonus was earned this year by John McCutcheon, N8XWO, making a presentation on "Selecting Equipment for Emergency Comms". The "Radiogram Origination" exercise, using materials developed by Ted Jacobson, W8KVK, to teach club members how to properly generate a Radiogram and insert it via amateur radio into the National Traffic System, would also have counted for the Educational Activity Bonus. 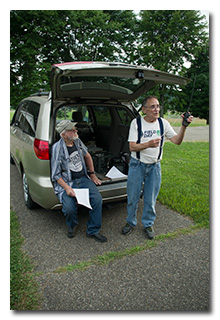 John McCutcheon, N8XWO, presents
an educational activity to Bob Moore, KC8KSM,
and to other students outside the frame.

Saturday dinner, Sunday breakfast, and Sunday lunch were provided to those present by Miles McFadden, KD8KNC.